Showtime Sound LLC is putting their L-Acoustics on the road with comedian Kevin Hart. 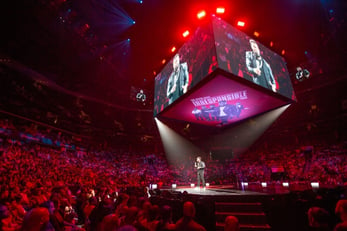 DC-area touring sound company for world’s top comedians hits the road with large K2 system for Kevin Hart’s 100-plus-date Irresponsible world tourFREDERICK, Maryland - April 2018 -- There’s nothing funny about the comedy business: when everything is riding on the setup and the punch line, the sound has to be absolutely perfect. That’s why the top-earning comics on tour today—names like Amy Schumer and Kevin Hart—have looked to Frederick, Maryland based Showtime Sound LLC and its president/CEO, Scott Tydings, to make sure that their audiences “get it.”
That pursuit of clarity, intelligibility, and coverage is exactly why the DC area’s first Certified Provider for rental (CPr) has been steadily acquiring an ever-growing inventory of L-Acoustics sound components for both touring comedians and other productions. With its already large inventory, Showtime Sound has just added an additional 40 K2, 36 Kara, 20 X8 and 12 LA-RAK II, each housing three LA12X amplified controllers. Showtime Sound has also now sold off all of its previous loudspeaker inventory to become an all L-Acoustics SR provider because, as Tydings says, “Making sure the world’s top comedians and musical artists have the absolute best sound money can buy is no joke.”
“Comedians like Kevin have the same level and kind of requirements when it comes to their live sound as any major music artist,” says Tydings, preparing for the second North American leg of Hart’s Irresponsible world tour. The first leg kicked off last September with theater warm-up shows and, in January, moved to small market arenas doing a conventional end-of-floor setup. The current leg began at the Santander Arena in Reading, PA on March 22 with a new in-the-round setup that doubles the audio needed. 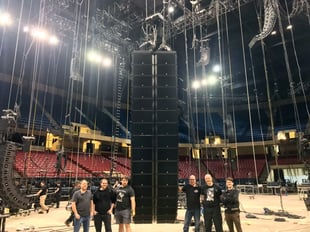 The tour will run until mid-December ending in Kuala Lumpur, Malaysia. On that exhaustive run, for which Tydings is the FOH mixer, he and Hart are accompanied by an L-Acoustics sound system supplied by Showtime Sound made up of 64 K2 and 60 Kara, eight KS28 subs, 20 X8 coaxials—including eight that are used as low-profile wedge monitors—and two self-powered 108P at the FOH mix position. The entire system (sans 108P) is collectively powered by 40 LA12X amplified controllers, and six of the LA-RAK II are flown in custom cages allowing clean cable runs for the in-the-round design.
“The L-Acoustics systems are just in high demand,” he says. And not just by leading comedians either. Showtime Sound has done tours, extended runs, and single show events with numerous music artists, including Anthony Hamilton, Avenged Sevenfold, DNCE, Jake Owen, John Legend, Little Big Town, Reba McEntire, Rise Against, Styx, Train, Trey Songz, and Tony Bennett, as well as festivals, such as this year’s Botanica Music Festival with headliners Deftones, and Logic, to name a few. 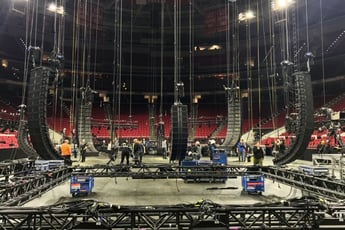 “Kevin is performing for tens of thousands of people each night, and every one of those seats has to have perfect sound,” he says. “It’s not like a music show, even though the sound system has enough power to do a major band. You have to hear every word, every inflection and nuance. That’s what makes comedy work. And that’s why L-Acoustics has become the PA we use with so many great comedians. It delivers.”
“And the L-Acoustics systems are in demand everywhere, so they’re always available,” Tydings adds. “When I do a fly date with Kevin, that’s the PA I’ll ask for. L-Acoustics is just dependable, great sounding, and gives us the coverage we need. No matter what seat someone is sitting in, it’ll sound like Kevin is talking directly to them. That’s the kind of effect comedy needs to work, and that’s what L-Acoustics gives us.”
Showtime Sound can be found on the Web at www.showtimesoundllc.com. For a list of Kevin Hart’s upcoming Irresponsible tour stops, visit www.kevinhartnation.com.

Link to full article by L-Acoustics.com