The Scripps National Spelling Bee has been an American cultural and educational institution since the first Bee, back in 1925. This year, the event took place on May 31, capping off “Bee Week,” at the Gaylord National Resort and Convention Center in National Harbor, Maryland, where it’s been held since 2011. For most of that time, Chris “Cap” Capaletti has been the Bee system guru for its live sound, which has grown with the event itself—this year a record-breaking 516 spellers from around the country vied to make the final round, culled from 11 million students nationally and internationally.

To fully cover and provide highly intelligible audio to a live audience numbering in the thousands, Capaletti laid out a line source array system comprising six L-Acoustics Kara per side for the main left and right hangs, with two smaller arrays of five Kiva II addressing the far sides of the audience. Five coaxial X8 boxes were deployed as stage monitors, while four KS28subwoofers were positioned backstage behind the furthest upstage scenic elements for LF reinforcement. A second truss flown out in the house featured four more arrays of four Kara each for delay. The entire system, which was supplied by Frederick, Maryland-based Showtime Sound LLC, was powered by a dozen LA12X amplified controllers housed in four LA-RAK II. 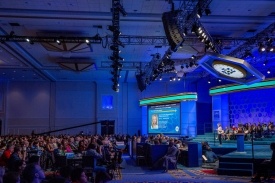 Deploying the L-Acoustics system for this event was arguably easier than spelling the winning word, “Koinonia.” Capaletti credits L-Acoustics’ LA Network Manager, which provides a slew of features, including real-time control and monitoring of amplifiers, a truly intuitive workflow and application-driven GUI, and automated discovery and matching of units over the network, for much of that.

“In terms of managing the system on site, LA Network Manager’s tools are the best there are,”says Capaletti, who has supervised the sound for the Bee for the past six years and was responsible for bringing the L-Acoustics system in. “Thanks to the program’s intuitive amplifier and group management, which lets me listen to changes in real time as I move things, I get to spend more time on the rig and on the console. I just get to where I need to be faster with L-Acoustics’ stuff, which is critical in an event like this, where we have television [the event was broadcast on ESPN] and lots of lighting, and I don’t have a lot of time before rehearsals start, so I have to do a lot of the system tuning by ear. LA Network Manager is simply the best software out there for this.”

“L-Acoustics’ hardware design also helped substantially,” says Capaletti. Four of the X8 speakers were arrayed across the front of the stage for contestants waiting their turns, but the fifth solved a unique challenge: “We want to have the speller’s monitor below them, so they can be looking down from the stage and at the judge speaking to them, so it feels natural,”Capaletti explains. “But every year, the space between the front of the stage and the judge’s position gets tighter and tighter. The X8 is the perfect size for this situation—it fits right into the space but still gives the speller a very natural-sounding voice to listen to. It’s one of the many little things that L-Acoustics gets right that makes a big difference in a show like this. There’s no way to pull this level of event off without the kinds of tools that L-Acoustics gives me.” 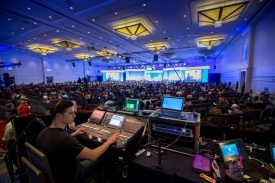 For more info on this year’s Scripps National Spelling Bee, visit www.spellingbee.com. Showtime Sound can also be found online at www.showtimesoundllc.com. This year’s winning moment can be seen HERE.

Link to full article by L-Acoustics.com